NECHV Case Manager Receives Boston VA “Above and Beyond” Award

Alanna Schonfeld, the WORTH Case Manager at NECHV, received the VA Boston Health Care for Homeless Veterans (HCHV) Above and Beyond Award in recognition of her exemplary service to the Veterans she works with. Schonfeld was nominated after accompanying a Veteran in the WORTH program to a court appearance and pleading with the court on his behalf, resulting in the court waiving his restitution and closing his administrative probation. She was presented with the award during a monthly HCHV meeting attended by NECHV leadership and colleagues.

Congratulations, Alanna! We are so proud to have you as a member of our team. We extend our sincere thanks to the Boston VA for recognizing her outstanding commitment to Veterans. 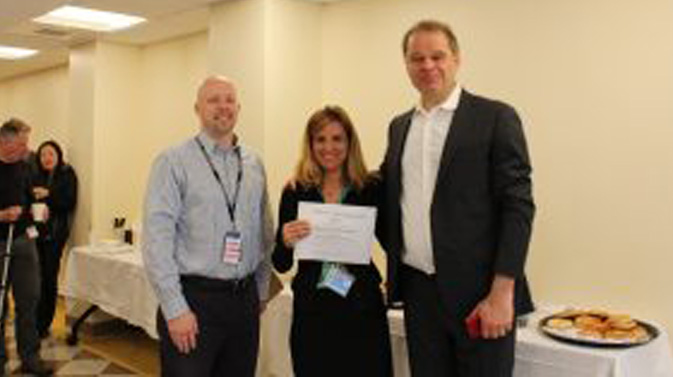 About the award: Above and Beyond is an opportunity to recognize the outstanding efforts of members and affiliates of the HCHV team in going above and beyond. These efforts include work with Veterans, or work with other agencies or departments, as well as in support of their fellow HCHV team members. Sean Terry, NECHV Director of Housing Services, was a previous recipient of the award.