He remembers the day when he wrote: At last, I don’t have to worry about me. 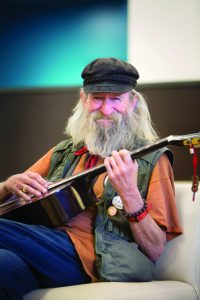 Living at the New England Center and Home for Veterans, the U.S. Navy Veteran finally felt secure. “Now I can worry about other people,” says the Melrose native, who is 67. “If anyone needs my help, I try to help them.”

Brad enlisted in the Navy during the Vietnam War. At age 18, he headed to Naval Station Great Lakes for training before serving on the USS Forrestal CV59. The world’s first super-carrier had been in the waters off North Vietnam, launching aircraft from her flight deck, before being deployed to the Mediterranean.

“At one point I tried to transfer to the Marine Corps so that I could go to Vietnam,” Brad recalls. But it didn’t happen. He had friends serving there, including the sole survivor of an attack at the Khe Sanh during the Tet Offensive who committed suicide when he returned home. “I grew up with him. When I saw his name on the war memorial, the tears flowed.”

Brad received an honorable discharge and began a series of jobs as a cook, including as a sous chef at Harvard University. “It was high pressure. One day I cooked for 600 people—by myself.”

His life soon spiraled out of control. “I was depressed, I was drinking, I lost my job, and my marriage went to pieces. I lost everything.” A friend told him about the Center. “He said they’ll take you in.”

Brad needed a roof above his head, but he received much more than that.

“I found friendship and camaraderie. This place is wonderful. Veterans and military people are the greatest people in the world. They understand because they’ve been there.”

Back on his feet, Brad got an apartment. Within a few years, his problems resurfaced. “I was living on the street—in cardboard boxes and subway stations. I almost froze to death.” Brad returned to the Center, where he is a permanent resident. “I have my own room, and we share a kitchen and bathroom.” He was diagnosed with post-traumatic stress disorder due to childhood trauma and attention deficit hyperactivity disorder.

“People used to think I was daydreaming, but I couldn’t keep my attention on anything. Now I know it’s not my fault.” These days he is happy to play his guitar, compose music, read, and meditate.

Brad has a lot to be thankful for. So do we.

We’re grateful for our accomplishments—how, every day, we make a difference in the lives of local Veterans. Like Brad, many need help to regain control of their lives. We are recognized nationally and regionally as a leader in Veterans’ services. By working closely with public officials, we tackle to evolving challenges our Veterans face.

At the New England Center and Home for Veterans, we are thankful to be able to make a difference in the lives of local Veterans. Brad is grateful for the friendship and support the Center provides. He knows his military service gave him something precious. “They taught me respect. As a Veteran, you learn that people die so that we can all live the way we want.”